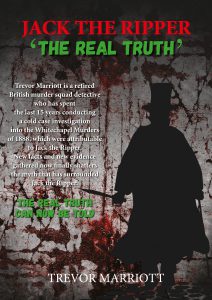 Trevor Marriott is a retired British Police murder squad detective, and leading Ripper expert, who since 2002 has been conducting a cold case investigation into The Whitechapel Murders of 1888 which were attributed to a fearsome unknown killer who came to be known as Jack the Ripper. For the past 133 years, this mystery has captivated the imagination of people worldwide and still does today.

His continuing investigation uncovered new evidence which now suggests many of the originally accepted theories surrounding this mystery have been wrong for over 133 years. Marriott now firmly believes that the killer did not remove the organs from the victims at the crime scenes as has been previously thought. He assembled a specialist medical team in an attempt to disprove this theory. Further new evidence gathered also now eliminates many of the “prime suspects” who have been continuously investigated for the past 133 years.

He has now finally concluded his long and protracted cold case investigation which uncovered startling new evidence and new facts, which now not only dispel but shatter the myth that has been, Jack the Ripper for 133 years. The real truth can now be told!

This new publication incorporates material from the previous publications “Jack the Ripper-A 21st Century Investigation”(2002) and “Jack the Ripper- the Secret Police Files”(2013) and now includes new evidence and new facts obtained in the interim periods of time.

Available in both paperback and kindle