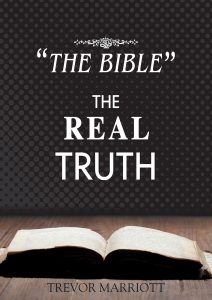 This new book is one of the most contentious, controversial and hard-hitting books ever to be published, which seriously questions the accuracy and the truthfulness of what is contained in the Bible as we know it today. The Bible is and has always been cloaked in mystery but despite that, it is still regarded as the backbone of Christianity, it is a book that is made up of sixty-six single books written by many different authors over centuries which are a combination of myths, legends, poetry, history, opinion, biography, letters, and theological commentary, and stories along with sacred texts, parables, psalms, proverbs and scriptures.

The Bible and its origins are regarded in the Christian faith as not just a book, but the authoritative, written word of God, but is what is written in the bible the real truth, or is it nothing more than just a collection of stories about events written by many different authors at different times over thousands of years, and with that has the passage of time distorted those stories to the point that the bible is now without question still readily accepted as being accurate and true?

If the many miracles and stories described in the bible can be proved to be flawed, false, or simply beyond belief then all the many explanations postulated by bible researchers worldwide, and those who firmly believe in the bible are meaningless.
But will those who firmly believe in the bible ever be convinced, or accept that it is unsafe, and that that the miracles never happened as described, or will people’s faith in the bible be so strong, that when challenged, the explanations of the modern-day researchers, and theologists who seek to explain away all the flaws, and the stories that beggars belief, along with all the contentious events in the diary still prevail?

“The Bible – The Real Truth” is a compelling and thought-provoking book and a must-read!!!

Available to purchase from Amazon in both paperback and Kindle